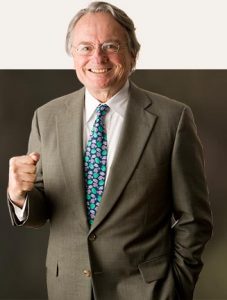 Steve and his brother Gary founded The Law Firm of Pajcic & Pajcic in 1974 with the goal of making a difference in our community. Through public service, philanthropic donations and a commitment to seek justice for his clients, Steve has accomplished that goal and much more.

Steve enjoys supervising all the cases in the firm. He has tried a multitude of jury trials over the years and continues to be involved in most jury selections and trials today. Steve's reputation for always being prepared and ready for trial has led to thousands of successful settlements. He takes great pride in being able to work each day with his son and three nephews.

Steve has always had a passion for public service. He was elected to the Florida House of Representatives for six terms. Steve received 7 consecutive St. Petersburg Times Award nominations as the Most Valuable Member of the State House. He was also the Florida Education Association's Outstanding Legislator in 1980 and 1982.

Steve developed the idea for, and was the prime sponsor of, the constitutional amendment increasing the Homestead exemption in Florida to $25,000. After losing a tight race for Governor, Steve retired from politics, but he remains active today supporting other candidates. He and his brother spearheaded the campaign of Nat Glover who was elected as the first African-American Sheriff in Jacksonville history.

Steve enjoys biking to work each day as well as fishing and kayaking. He and his wife Anne also love spending time with their granddaughter and two grandsons.

Steve is also known for his tremendous generosity. Steve and Gary established a $1 million endowment to pay the full college tuition of certain graduates of their high school alma mater, Paxon High, who are accepted, enrolled and qualify for financial aid at the University of North Florida. To this day, almost 100 students have benefited from this opportunity. Other contributions include a $1 million donation to boost education at five inner-city elementary schools, a $2 million donation to Edward Waters College and most recently a fund established to help staff Jacksonville's parks over the summer so young people would have a safe place to play.

Contributing Author, "The Pros and Cons of the Constitution Revisions-Which Levers to Pull," 52 Florida Bar Journal, 678, 1978.