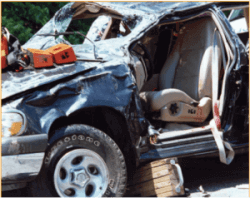 After a four-week trial the jury found that Ford should pay $10,184,315 to the husband of a woman killed when the roof of their 2000 Explorer collapsed and crushed her skull during a rollover. It is the first verdict against Ford in a case focusing exclusively on the defects in the Explorer's roof and related seatbelt system.

Jane Doe was driving the Explorer on I-95 in Virginia in May 2001 when she swerved to avoid a merging Winnebago. During the ensuing five rolls the Explorer roof crushed down to the back of the driver's seat, and the deformed B-pillar caused 7 inches of slack in her seatbelt, which allowed her head to be crushed against the outside of the roof rail. Her husband and sister, who were passengers in the Explorer, walked away with minor orthopedic injuries. All occupants were wearing their seatbelts.

In contrast to other Explorer cases around the country, Pajcic & Pajcic decided not to focus on the Explorer's instability and propensity to roll over as a product defect. Instead, Pajcic & Pajcic argued that Ford should provide protection for vehicle occupants when the rollover occurs.

Pajcic & Pajcic expended over half a million dollars on crash tests, experts, exhibits, and other case costs. The firm organized over 940 exhibits into digitized formats for a multi-media presentation to the jury and built a full scale model of the Explorer driver compartment to bring into the courtroom. 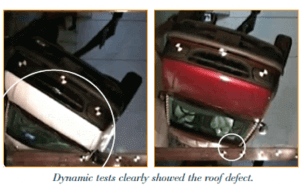 Mrs. Doe was a chemical engineer and graduate student in the University of Florida School of Pharmacy at the time of her death. She and John had been married two and a half years and had no children.

Although they were not legal survivors under Florida's wrongful death law and had no pecuniary interest in the outcome, Jane's parents and sisters were present throughout the trial and provided compelling evidence of Jane's character and personality and, thus, the magnitude of John's loss.

After the verdict John re-emphasized what he has told Pajcic & Pajcic from the first time he came to the office: his mission is to get Ford to build the Explorer with a stronger roof and better seatbelts so as to prevent others from suffering Jane's fate.