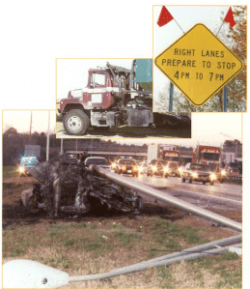 John Doe was killed in a crash so violent that two vehicles exploded in flames and his spinal cord and aorta were both severed. The defense strategy was to admit liability and limit the trial to damages to his employer.

Mr. Doe was a 36 year old married father of two who was stopped in the typical 5 p.m. back-up at the Blanding Boulevard exit off I-295. The defendant barreled into the rear of Doe with his large truck at 65 mph and struck three more vehicles before coming to a halt.

The trial judge allowed Pajcic & Pajcic to proceed with punitive damages against the driver because he ignored multiple warning signs with flashing lights and made no apparent attempt to brake or change lanes. Even though Pajcic & Pajcic discovered egregious negligence against the employer as well, the trial judge refused to allow punitive against it because none of the negligence was relevant to the crash or to the driver's wanton conduct.

While Pajcic & Pajcic is not satisfied with the deterrent effect of the recovery on the defendant company, at least the recovery does provide financial security for Mr. Doe's family.