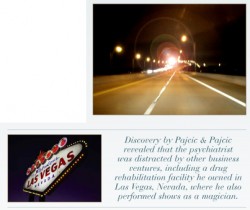 It is hard to know why Jane Doe was suicidal. She had a good job with a prominent medical clinic, a loving husband of many years, and close family. Yet Jane struggled with depression, melancholy, and paranoia.

Jane and her husband realized her medication was no longer working when she started thinking and talking about drowning herself. He drove her to the hospital associated with her clinic, where she was evaluated, and hospitalized under the Baker Act. She was then transferred to Ten Broeck, a Jacksonville mental health hospital.

At Ten Broeck, Jane was seen by a physician only once and there was no attempt to adjust her medication. After three days she was discharged by a physician's assistant with a follow up appointment in one week. Two days after her discharge Jane slipped out of the house in the middle of the night and jumped off a bridge.

Discovery by Pajcic & Pajcic revealed that the psychiatrist was distracted by other business ventures, including a drug rehabilitation facility he owned in Las Vegas, Nevada, where he also performed shows as a magician. The physician's assistant who discharged Jane had a history of drug abuse. He had been disciplined by the Florida Board of Nursing for prescription fraud and arguably was impaired while treating Jane.

Despite arguments over vicarious liability and the admissibility of the damning evidence and even with legislative caps on medical malpractice damages, the case settled for $1 million at mediation. The physician's assistant has been fired; the psychiatrist has been in the news because of his exorbitant water bills that he says are related to his plan for another treatment center to be surrounded by ponds; Jane Doe's family is still trying to cope, but with a better sense of justice done.