The trucker blew through a stop sign at 55 mph and walked out on a drug test, and his company "misplaced" his personnel file. The crash killed Jane Doe and hospitalized John, her husband of 34 years. Yet the defense's best offer, finally made after the commencement of trial, was only $2 1/2 million.

It was not surprising that the defense tried to minimize John's losses. And it is true that John has made a good recovery and that Jane was 67 years old with serious health problems that required her to sleep with an oxygen mask.

What was surprising to Pajcic & Pajcic was that, in a case of egregious trucking liability, the defense tried to shift the blame. Even though John was driving within the speed limit and both he and Jane were belted, the trucking company claimed comparative negligence right up to opening statements at trial. 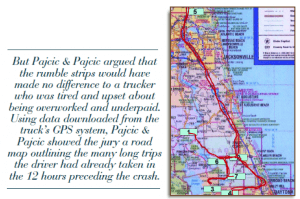 But the main culprit, according to the defense, was Flagler County. The trucker's reconstruction expert said the stop sign was not big enough and that the warning signs approaching the intersection did not comply with standards. The defense did have a valid point in that the county road department had recently paved over rumble strips before the stop sign. But Pajcic & Pajcic argued that the rumble strips would have made no difference to a trucker who was tired and upset about being overworked and underpaid. Using data downloaded from the truck's GPS system, Pajcic & Pajcic showed the jury a road map outlining the many long trips the driver had already taken in the 12 hours preceding the crash. The jury put 60% of the blame on the truck driver and 40% on his company. The jury gave its biggest award, $3 million, for John's pain and suffering for the loss of his wife in the past -during the time the defense had continued to suggest that John shared in the responsibility for Jane's death.