$2.1 Million from Valet Company for Crash into Hotel Lobby 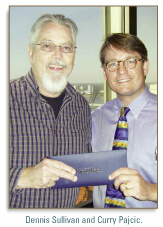 The hotel's security camera captured all of the shocking events. The car crashed right through the double glass doors and ran right over John Doe, a banquet captain in his hotel uniform walking through the lobby. The valet had left the car running in reverse instead of park and, when he jumped back in, he hit the gas instead of the brake.

John suffered life threatening injuries and ended up having multiple surgeries, life threatening infections and a liver transplant. With the support of his girlfriend and his two loving adult children who flew into town, John survived it all to look and feel amazingly normal, but unable to handle all the demanding duties in the hospitality industry where he had worked all his life. 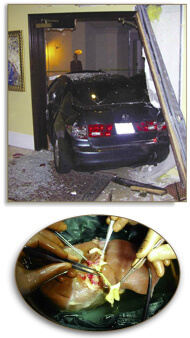 From a legal perspective there were two major issues. With the initial client call Pajcic & Pajcic identified worker's compensation immunity as a potential barrier to fair recovery. Fortunately, the hotel contracted out valet services to a separate, national company with plenty of insurance. The defense still raised worker's compensation as an affirmative defense and their summary judgment motion was pending at the time of mediation.

The second major issue was medical causation for the liver transplant. Pajcic & Pajcic anticipated the defense arguing that the transplant was based on prior medical conditions rather than the trauma of the accident. Pajcic & Pajcic traveled to South Florida to confer with the prominent transplant specialist who proved to be a strong advocate for John. He opined that, although John had early cirrhosis, the crash was the direct cause of the transplantation.

The case settled at mediation for an amount that gives John the financial security he deserves and something to leave his grandchildren. He still enjoys seeing his friends at the hotel and helping its guests as a part time concierge.