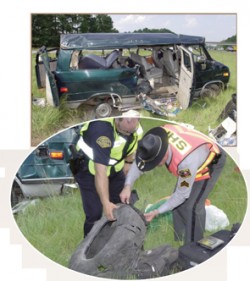 Old, unused spare tires may be the deadliest product defect in motor vehicles today. Despite all the safety improvements in occupant protection and rollover prevention, tire manufacturers still hide the age of tires in obscure sidewall codes intelligible only to trained mechanics.

A spare tire can sit in the trunk of a vehicle for years and still look brand new even though its inside has rotted away so much that the tire can detread without warning. The tire is especially dangerous on vans, SUVs and light trucks because of their high propensity to spin out of control and rollover after a detread.

The detread in this case killed three people and paralyzed a fourth. They were all Haitian nationals legally visiting the United States and traveling from New Jersey to Florida in a 13 year old 12 passenger van.

The owner and driver of the van was also a Haitian national who had bought the van used only a year before the accident. Although all of the other tires on the van had been changed out over the years, the spare had sat in the back with no sign of wear or tear until the new owner placed it on the right rear of the van shortly before the trip.

Halfway to Florida, the group stopped for lunch at a Popeye's in North Carolina and the owner went to a nearby tire store where he bought a new tire to replace another one on the van. Soon after the group got back on the interstate, the old spare tire detreaded and the van rolled over in the median with the resulting tragic deaths and injury.

On behalf of the victims and their families, Pajcic & Pajcic sued the tire store, the tire manufacturer and the car company. The cases highlighted a salient public safety concern, but also presented challenging factual and legal issues. 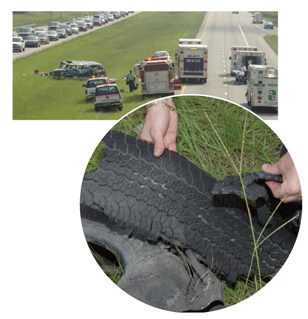 Both manufacturers pointed out that under either the Florida or the North Carolina statute of repose, the tire was too old for a product liability suit. The tire store had its own defense based on the owner's signature on the invoice declining a free inspection. All defendants pled driver error and failure of all the victims to use a seatbelt.

Language barriers and immigration laws complicated everything. The driver's deposition required an interpreter and stretched out over three full days. All of the decedents' families were stuck in Haiti where climatic disaster and civil disorder made communication difficult.

The decisive legal issues were all choice of law questions. After extensive briefing and argument worthy of an appellate setting, the trial judge ruled that the controlling law on the statute of repose defense was the state of manufacturer, which had no statute of repose.

Conflicts of law questions also dominated the debate over seatbelt usage and joint and several liability. All parties filed lengthy briefs, but oral argument was postponed at the last minute to allow mediation to proceed. All claims were subsequently resolved to the mutual satisfaction of all parties.

The settlements have done much to improve the lives of the victims and their families. Hopefully, claims like these will ultimately save the lives of others as tire manufacturers decide to plainly label their tires and to warn consumers that all tires, regardless of tread depth or tire usage, only have a useful life of only 5-6 years.