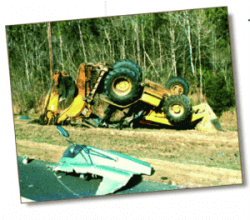 "John" Doe was helping a friend by driving his backhoe to another location. Even though it was a bright, clear, dry day, a tractor trailer rammed into the backhoe and propelled it off to the right of the highway.

John was rushed to Shands. The family drove by the accident scene and arrived at the hospital just before John died.

The defense argued comparative negligence because John was not wearing the seatbelt and did not have his flashers on, but most of the dispute centered on damages.

John's widow Jane was heartbroken by the loss of her husband of 38 years, even though he admittedly had a shortened life expectancy because of his heart condition.

While John was involved and instrumental in the lives of his adult children and their families, their claims depended upon the application of Florida's impact rule to this case.

However, there was one child whom John and Jane were still raising - John's great niece. For the first six years of her life she suffered from child abuse, abandonment by parental figures, incarceration of her biological father, and frequent changes in care givers. After John and Jane took her in at age seven, she blossomed under John's guidance as her constant companion. His death three years later was devastating to her.

Pajcic & Pajcic argued for an extension of Florida's equitable adoption doctrine to John's great niece and presented authoritative psychiatric testimony about her counseling needs following John's death and about how her suffering compounded Jane's loss.

The $2,400,000 settlement allows Jane to devote more time and resources to John's little companion and is John's way of providing for both of them even in his death.