$2.2 Million Recovery for Warehouseman Crushed Between Truck and Dock 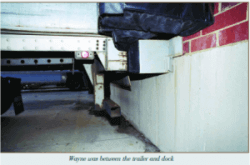 John Doe was crushed to death between the loading dock and the tractor trailer backing up to it. How did it happen? Was it John's fault or the driver's? How would John's four Doe children and widow get by without their breadwinner?

John had helped load the truck and then jumped down to stop the driver as he started to pull away because there was one more package.

John and the truck driver reopened the trailer doors, and John went to grab the package. Instead of waiting for John, the driver got back into the truck and began backing up to the dock. John was standing on the ground holding the package as he was pinned between the truck and the dock.

It was obviously a case of miscommunication, but no one would ever know John's side of the story. Moreover, John's company confirmed that all merchandise was supposed to be loaded from the dock, not the ground.

Of course, the driver had to bear some of the blame for backing where he could not see and failing to honk or turn on his flashers. But the real breakthrough in assigning fault to the truck driver came from discovery that impeached his credibility.

First, Pajcic & Pajcic discovered another backing accident caused by the driver but not disclosed to his employer even though it happened only one month before he was hired. Then, using the satellite GPS data detailing the history of the truck's movements, Pajcic & Pajcic was able to prove that the driver had repeatedly falsified his logs. The evidence was so incriminating that the driver took the Fifth instead of testifying about his logs in his video deposition.

Pajcic & Pajcic also moved to amend to add a count for negligent hiring and supervision. The trucking company had hired the driver based on a telephone interview with no signed application and without investigating his prior employment, prior accidents and medical problems, which included both vision and hearing deficits.

Perhaps the most important factor in the ultimate resolution of the case was the compelling testimony that John was a conscientious worker and exemplary family man. John was the kind of father who took two weeks off to be home for the birth of his children. His pastor testified that he was at church every time the doors opened, sang in the choir and played the Angel Gabriel in the church Christmas play.

The case settled for $2,200,000 after the amendment adding negligent hiring and supervision. The settlement provides educational funds for all the children and enough financial support to allow Jane to continue as a full-time mother and homemaker.