Home » Case Results » $3.4 Million For Sign Which Does Not Break Away 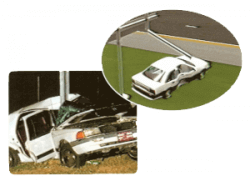 John Doe was on his way home from work when a speeding drunk driver sideswiped his car and sent him sliding into a directional sign alongside Interstate 10. John's car wrapped around one of the sign poles and John suffered catastrophic brain damage which makes it impossible for him to work and difficult for him to walk or talk.

Of course the drunk driver had no insurance and John, unfortunately, had no uninsured motorist coverage. But John's brother Carroll would not give up hope and brought John to Pajcic & Pajcic for help.

Federal guidelines require signs to be placed as far away as feasible from through traffic lanes and generally to be installed to break away on impact. Pajcic & Pajcic sued the engineering firm for placing the sign too close to the interstate and the sign contractor for improper installation.

The engineering firm argued that the outside lane of the interstate was not a through lane, but an auxiliary lane and that placing the sign farther away would put it in a ditch. Pajcic & Pajcic successfully refuted these arguments with its own survey and engineering studies and with contradictory evidence from the defendant's own files. Faced with this evidence, the engineering firm paid $500,000 at mediation.

The case against the sign contractor was complicated by the fact that the sign had been replaced and the original poles and bolts discarded before Pajcic & Pajcic was retained. Nevertheless, Pajcic & Pajcic was able to produce computer animations and crash tests which vividly demonstrated that, if the sign had been properly installed, the sign pole would have easily broken away and John Doe's car would have slid to a safe stop.

Pajcic & Pajcic's expert, who helped set the original federal guidelines for breakaway signs, testified that the contractor must have tightened the bolts ten times tighter than prescribed by the plans. The sign contractor paid $2.8 million and the general contractor and construction management company paid $50,000 apiece.

After the conclusion of the case, John Doe smiled for the first time since the accident. It was not so much the money, but that he was once again the provider of his family's financial security, rather than a burden to them.

The felon who sideswiped John's car was killed by an oncoming trucker as he fled the scene on foot. Pajcic & Pajcic has written Florida's Department of Transportation requesting that all interstate signs be reinspected to ensure that they comply with breakaway guidelines.