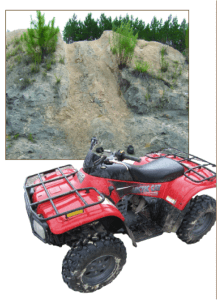 John had just graduated from high school when his cousin invited him out to his uncle's farm to go riding on their ATVs. The cousins rode down Cowpoke Road to a development site with lots of trails.

When John came over the top of a small hill, he was surprised by the steep dropoff and the ATV flipped over.

John, who was not wearing a helmet, suffered catastrophic head injuries. The uncle's homeowner's insurance paid its limits because John was not provided with a helmet. That money barely covered the lien for John's past medical bills.

Fortunately, Pajcic & Pajcic's investigation revealed another avenue of recovery. The land had deceptively dangerous trails. In fact, another rider had been seriously injured in a similar accident on the property only a few months before John. Yet the owner had done nothing to maintain the trails, limit access to them, or warn about them.

In response to Pajcic & Pajcic's settlement brochure, the insurance company for the landowner timely tendered its $1 million limits. While the settlement will not provide for all the care John needs, a special needs trust will enhance his future quality of life.