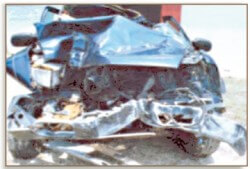 They are a curse of North Florida: The poorly lit log trucks slowly pulling out onto the rural highways in front of oncoming traffic in the darkness before dawn. They travel before dawn so that they will be first in line when the mill opens. The trailers do not have the bright lighting of modern day box trailers because the Florida Legislature continues to give agriculture and log trucks special exemptions.

Over the past three decades, Pajcic & Pajcic has time and again dealt with paralysis, brain injury and death caused by these almost invisible behemoths. The case of John Doe was especially heartrending because it involved the death of a grandson of one of Pajcic & Pajcic's first employees who is like family to Gary and Steve.

John was 22 years old living in Gainesville, but working in an apprenticeship training program in Jacksonville so as to become a pipefitter like his dad. John would drive his pickup to Jacksonville early Monday mornings and then spend the weeknights with an aunt and uncle in Jacksonville.

At 5:00 a.m. on June 23, 2009, John was halfway from Gainesville to Waldo. He was in the left lane of the two southbound lanes with his headlights on and his pickup set on cruise control.

The log truck pulled out from the woods on the other side of the highway and turned into the left lane in front of John. It was going about 35 mph when John crashed into its rear. The logs penetrated the windshield and John died instantly.

The log truck had 11 DOT violations including several that should have kept it off the road. The truck driver was 74 years old and blind in his right eye, which would have kept him from driving under Federal rules had they applied. The overhanging logs did not have the flashing light with multidirectional lens, which is one of the newer, minimal Florida regulations that do apply to log trucks.

Incredibly, as it so often occurs, despite all this the crash report and the traffic homicide report placed all the blame on John.

Similarly blaming John for the crash, the insurance company offered only $100,000 presuit. Pajcic & Pajcic rejected the request for presuit mediation and filed suit on behalf of John's grief stricken parents.

The depositions of the truck driver and logging company highlighted the egregious nature of defendants' normal business practices. In fact, less than a year before John's death, another driver for the same logging company had been involved in the same kind of fatal predawn crash with an overload of logs lacking the required multidirectional flashing light.