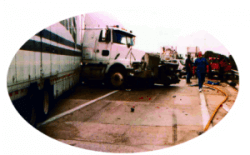 The trucking company continued to fight liability to the very end even though the crash report showed its truck had plowed into the back of John Doe and seven other vehicles in rush hour traffic on I-95 in Jacksonville.

Pajcic & Pajcic welcomed the defense strategy because it opened the door for evidence concerning driver fatigue, the primary cause of big truck crashes today. In this case the defendant driver had driven 1,700 miles to make deliveries in three cities over a six day period. The defendant trucking company was unable to produce the driver for deposition or trial. Rescue had to use the jaws of life to extract John from the cab of his pick-up. John had transverse process fractures at five levels of his back. More seriously, he had a pelvic fracture which required screws and plates to hold the shattered bones together.

The severity of the injury to John's abdominal organs did not manifest itself until months after the crash when John had to go back to the ER with a complete bowel obstruction. The surgery removed part of his intestines and left him with adhesions and an ugly scar.

Despite the severity of his injuries John returned to work on a limited basis providing care-taking services for an affluent widow, who provided compelling testimony as to John's character and the impact of the accident. Indeed, Pajcic & Pajcic felt that the strongest part of the damages case was the appealing personality and character of not only John, but also his wife Jane.

Even though the case was hotly contested, Pajcic & Pajcic and the defense attorneys were able to maintain cordial relations and open communications throughout the litigation. This relationship was critical to the last minute negotiations, which resulted in a settlement of $2.75 million in the courtroom as prospective jurors waited in the hallway outside.