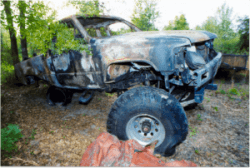 It was nighttime on a rural two-lane highway in North Florida. A pickup, whose bumpers had been jacked-up by a prior owner, lawfully slowed to turn into a restaurant. The following car, a Saturn whose driver had 14 prior speeding violations and had already caused five other wrecks, submarined the pickup.

The night lit up with flames because the impact punctured the pickup's fuel tank. Both drivers died, and the Saturn's passenger was seriously injured. The driver of the pickup was 23-year-old John Doe, who had recently moved from his parents' farm outside Fort White, Florida. In addition to his pickup, John loved hunting and fishing with his friends and family.

Representing John's parents, Pajcic & Pajcic insisted their claim was worth more than the available policy limits despite no economic loss and the homicide report claiming John's bumper was higher than the legal limit. Pajcic & Pajcic was able to persuade the firm representing the passenger of the Saturn to join with them and present a united front to the underlying and excess insurance carriers. Facing the threat of an excess judgment for bad faith, the carriers tendered their limits at an early mediation.