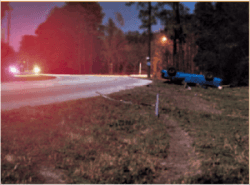 John Doe was too drunk to negotiate a curve on Old St. Augustine Road. He lost control of his father's pick-up, which left the road and overturned several times.

John was not wearing a seat belt and was ejected from the truck. He broke his back at T12/L1 and is now a paraplegic. John was only 20 years old at the time of the accident and was still living at home while going to college and working part time at Shepherd's Restaurant. When John told his parents that he had been drinking at Shepherd's right before the crash, they called Pajcic & Pajcic to see if anything could be done. Pajcic & Pajcic's investigation revealed shockingly irresponsible practices at Shepherd's. All employees, regardless of age, were offered a free "shift drink" whenever they clocked out. Shepherd's had a "mug club" which patrons and employees could join to get a mug, a T-shirt and discount beer.

John had not worked the night of the crash, but had been at Shepherd's because he knew he would be served there. In fact, that very night John had been told he could join the mug club. Of course, the defendant denied serving John anything, but Pajcic & Pajcic found former employees to back up his story. 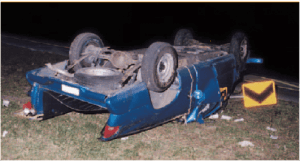 The defense also argued that John's comparative negligence would keep any judgment low, especially since John was almost 21 when it happened. Pajcic & Pajcic cited case law holding there can be no comparative negligence on the part of a minor who had consumed alcoholic beverages unlawfully provided to him. E.g., Booth v. Abbey Road Beer Inc., 532 So. 2d 1288 (Fl 4th DCA 1988).

Although Shepherd's had closed down by the time of mediation, it had $1 million in insurance coverage. The case settled for $950,000, leaving $50,000 to cover the less serious injuries of John's adult passenger.

Though paralyzed below the waist, incredibly, John can now walk with the help of multiple bilateral orthoses. He is also an active participant in wheelchair sports and speaks publically about his experience. John generously donated $5,000 to Brooks Rehabilitation Hospital out of the settlement which was matched by Pajcic & Pajcic.