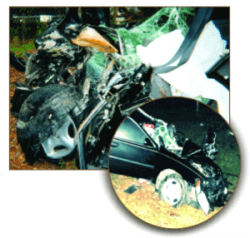 Jane Doe was an attractive, athletic college student hoping to become a teacher in South Georgia like her mother. Then one night a drunk driver coming around a curve crossed the center line and crashed head on into Jane's small car. The impact caused multiple fractures to both legs, her pelvis and her left arm. She had six surgeries implanting rods and fixators in all the fractures. The Shands Gainesville physicians also diagnosed a traumatic brain injury with mild cognitive deficits. After all her treatments Jane ended up with a limp and numerous scars.

According to traditional analysis, maximum recovery in Jane's case depends on several key factors. First, evidence of drunk driving would motivate the jury and enhance the verdict. Even with an admission of liability the jury would find out about the drunk driving through a punitive damage claim. Second, the extensive injuries would probably preclude teaching and severely limit Jane's recreational joys such as her avid horseback riding.

None of these factors played out in this manner. Of course, Jane still suffers from significant injuries. Her past medical bills are $350,000 and the present value of her estimated future medicals is over $1 million. Yet Jane is such a motivated young woman that she did not let her injuries stop her from obtaining her degree with honors and becoming a teacher.

The normal factors did not work out on the liability side either. The defendant driver died at the scene, and under Florida law his estate cannot be sued for punitive damages. Moreover, his employer had no knowledge of, or involvement in, his drunk driving.

Nevertheless, Pajcic & Pajcic was able to argue persuasively that the defendant's drunk driving would have to come before the jury as part of the damages aspect of the case. Although Jane was striving mightily to overcome her injuries, the accident took a heavy mental and emotional toll on her. Her mental health counselor and a prominent forensic psychiatrist both concluded that the defendant's drunkenness was a significant factor in Jane's psychiatric reaction to her injuries.

A defense psychologist hired to rebut evidence of Jane's brain injury unwittingly provided strong support for the relevance of drunk driving to her mental state. In minimizing any traumatic brain injury in a 47-page report, the prominent defense expert focused on Jane's "significant psychiatric distress" because of her "anger and bitterness toward what has unjustly happened to her" "because of an irresponsible drunk driver".

In the end truth and justice prevailed. Without punitive damages and with Jane in the classroom and back on horseback, the case still resolved for a fair settlement of $5 million.