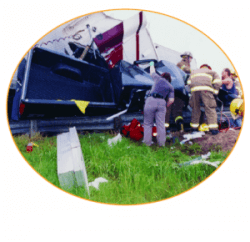 Joe Public had his own successful homebuilding business. He was an adoring husband and involved father, who played with and coached his two boys. His charismatic personality made him the center of the family and their social circle.

Joe was driving South on I-95 to the family's lake home when a northbound tractor trailer spun out of control, jackknifed through the median and slammed head-on into Joe's pick-up. Joe tried to avoid the truck, but was hemmed in by the guard rail of an overpass.

While the truck driver did not do drugs, he did ultimately plead guilty to vehicular homicide for "driving the semi-tractor trailer at a high rate of speed, tailgating other vehicles on rainy, wet roads with bald tires and faulty brakes after having driven from Augusta, South Carolina to Miami, Florida and back to just north of County Road 210 on I-95 within 12 hours contrary to Florida law". Joe's corporate attorney Richard Hathaway referred his distraught but strong widow Jane Public to Pajcic & Pajcic even though he knew the trucking company had only $1 million in insurance. It was four years before the guilty plea, and the trucker had the prototypical phantom vehicle to blame, but Pajcic & Pajcic still realized that the value of the case was many times the insurance limits.

Fortunately for Jane and the children, the truck's insurance company mishandled the claim. It sent an investigator to the house to get information on Joe's income without offering the limits which were clearly due. Then the insurance company ignored Jane's request for an early resolution until after her own carrier had tendered its UM limits and sought a blanket release. 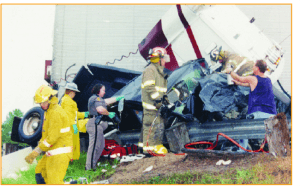 Jane authorized Pajcic & Pajcic to file suit. Then the truck's insurance company tendered its limits. It was too late.

Pajcic & Pajcic told Jane the underlying case was worth $10 million. The problem was how to collect it. The trucking company was fly-by-night with no assets. It would not be a typical bad faith case against the insurance company for the excess judgment over the limits because there was no time-limited demand for the limits. Moreover, the insurance company itself was small with its own financial difficulties.

The case was finally resolved just before trial for $4 million with some of the money paid over time with interest. While less than fair value, the settlement gives Jane the financial security she needs to raise the two boys Joe was so proud of. Despite the settlement, the principal of the high school where Jane has been teaching since Joe's death has persuaded Jane to stay on because her students need her too. Jane's class of 90% minority students has the best results on standardized tests in all of Putnam County.