Trucker Pays $7 Million Even Though Not Charged With Accident 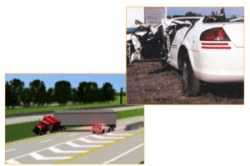 As so often happens in an interstate crash involving a tractor trailer, the truck driver in this case blamed a phantom vehicle, which he claimed pulled out right in from of him from the median on I-95 in Brevard County. The driver lost control of his big truck which careened across the median and crashed into several vehicles in the opposite lane of traffic killing three people and catastrophically injuring Pajcic & Pajcic's client Jane Doe.

In most cases the phantom vehicle is a figment of the trucker's imagination, but in this case eyewitnesses confirmed the existence of the vehicle and the general outlines of the trucker's story. In fact, in its crash report the Florida Highway Patrol absolved the trucker from any responsibility for the crash. The key to proving the trucker's liability lay in the details of the deposition testimony and the accident reconstruction based on those details, and, of course, as always, in the egregious violations revealed by the trucker's logs and the company's personnel and maintenance records.

In a cooperative effort with other plaintiff's counsel, including Sammy Cacciatore and Charlie Roberts, Pajcic & Pajcic was able to prove that the truck had brakes out of adjustment; that the driver lied about his driving record on his application and the employer knew it but hired him anyway; and that the defendant had driven over hours for the two of the three days leading up to the crash.

Although the defendant and two fellow truck drivers who witnessed the crash claimed the defendant "had no chance" to avoid the phantom vehicle, reconstruction of the accident based on the details of their accounts proved otherwise. The defendant was aware of the car in the median 1400 feet or 15 seconds before it pulled out and had 600 feet or six seconds to react once the car began entering the highway. Yet the trucker never applied his brakes or even slowed down.

What made Pajcic & Pajcic's reconstruction especially impressive to potential jurors was the 16-foot-long scale model of the roadway and a separate computer animation. The animation showed not merely how the accident happened; but also how, if the defendant had simply taken his foot off the gas, the accident never would have happened.

Although Mrs. Doe's injuries were extensive and catastrophic, Pajcic & Pajcic had some concern that a jury might not appreciate their magnitude since Mrs. Doe superficially appeared rather normal after her recovery. To address this concern Pajcic & Pajcic prepared a day in the life video and a comprehensive life care plan. The best evidence on damages, however, was Jane's husband John who projects a caring and loving attitude despite his constant duties attending to Jane.

Despite all the persuasive evidence Pajcic & Pajcic was prepared to present, the defendant was not willing to offer fair value for the case until the first day of trial. The case settled at that time for a total recovery in excess of seven million dollars. The recovery not only holds the defendant trucker accountable, but also gives Jane and John the means to live comfortably and with the care Jane requires.