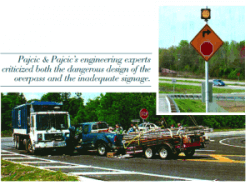 John Doe's young life was shattered as he chatted with his boss on the way to work one morning. John was riding shotgun when his boss could not negotiate a curve at the bottom of an overpass. Their pickup and utility trailer crossed the center line and rammed into the side of a garbage truck. John's limp body fell to the ground when his door was opened. The crash left him paralyzed from the neck down.

The small company John worked for had no workers compensation coverage and only a small policy on the truck. Pajcic & Pajcic's investigation and analysis showed minimal fault on the garbage truck and no feasible crashworthiness claim against the pickup manufacturer.

The best hope for helping John seemed to be a case based on the dangerous road design. The crash occurred in rural west Jacksonville where Normandy Boulevard passes over train tracks before intersecting US 301. It is a tricky proposition to put a viaduct over the tracks but not the highway because the tracks are so close to 301.

While the state's liability is limited by sovereign immunity, when it decided to rebuild the overpass, the state hired private engineers who changed the design so that Normandy makes an unexpected sharp right turn at the bottom of the steep overpass. Although drivers cannot see the hairpin turn until the last minute, at the time of the accident the only warning was a confusing sign on the down slope of the bridge.

Pajcic & Pajcic's engineering experts criticized both the dangerous design of the overpass and the inadequate signage.

The bad news for John's case was that the engineering firm had less than $1 million in insurance. John's past and future medical bills far exceeded all the available insurance.

The good news for John was that, when Pajcic & Pajcic presented the claims to the two insurance companies with all relevant information, both companies chose to defend the claims and bargain them down instead of paying up on a timely basis.

The insurance company for the pickup finally resolved its part of the case at a final mediation just before trial. The other defendant filed a bankruptcy petition a few days before trial, but with new attorneys it finally paid its share at a subsequent mediation. The total recovery of $8 million included more than $7 million above the limits of the policies.

Of all the cases handled by Pajcic & Pajcic, the most rewarding are those where the recoveries help a catastrophically injured client cope with his disabilities. The money is never enough, but every dollar counts. John has a handicapped equipped house and van, financial security for life, and a new optimism about the future.