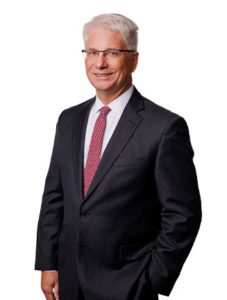 Tom Slater is a go-getter who likes to move his cases along quickly. He has been with The Law Firm of Pajcic & Pajcic since 1995 and has been lead attorney in over 600 cases with total recoveries in excess of $200 million. A board-certified trial lawyer with an AV rating, Tom is licensed in Florida, Georgia and Virginia.

Tom is known for his aggressive approach to his cases. He likes to dig deep and uncover details that are often hard to find. In one case, he discovered that a semi-truck driver involved in a fatal wreck was behind the wheel because a terminal manager fabricated a background check and made up a road test. Following negotiations with defense counsel, the family agreed to settle the case for $9.65 million.

Tom Slater's efforts have also led to improved safety conditions in Florida. One case, which made it to the state Supreme Court, found that utility companies are liable for inoperative street lights. A dark street was to blame for a driver not seeing a 14-year-old boy, who was killed.

Tom's parents were both teachers at the Florida School for the Deaf and Blind. His father-in-law, the late Ed Austin, served as Mayor of Jacksonville, was the first Public Defender for the 4th Judicial Circuit and served as State Attorney for close to 20 years.

Tom and his wife Amy have two children. Their daughter Sarah is a graduate of Boston College and the recipient of a Fulbright grant to teach English in Brazil, while their son Austin played baseball at Stanford University and currently plays for the San Francisco Giants. Tom loves reading, traveling and snow skiing.

Tom continues his proud family heritage of public and charitable service. He is currently serving on the board for PACE Center for Girls. He has been a member of Jacksonville Area Legal Aid since 1993, serving on the board from 2005-2011 and as President of the board from 2007-2009. He has also served as President of the Jacksonville Justice Association and the Jacksonville Speech and Hearing Center. Tom is a frequent speaker at legal seminars and is active in a variety of organizations.

Tom has served on the Florida Standard Jury Instruction-Civil Committee. He served on the Florida Bar Association's Rules of Civil Procedure Committee for six years and was vice chairman of that body for two years. While at the University of Florida, he was a member of the prestigious Florida Blue Key. He has been very involved in his church, serving two terms on the vestry and one term as junior warden.