$1.75 Million for Hand Injury After Car Skids Underneath Truck 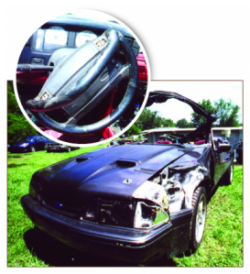 When the big truck pulled out in front of him, John Doe had no time to stop his Mustang convertible and the Mustang had nowhere to go but to skid beneath the behemoth.

Fortunately, the Mustang was low enough to slide through to the other side of the trailer and John was quick enough to duck his head down into the passenger seat.

Unfortunately, the trailer flattened the top of the Mustang's steering wheel and tore off two of John's fingers and so severely injured the hand that the doctors finally decided to amputate. Despite the horrific injury, within a few weeks of the accident, John returned to work with his yard service and as a big truck mechanic at a truck stop near the scene of his accident.

The crash report cited the truck for violation of right of way and John for speeding. Pajcic & Pajcic worked with defense counsel for an early mediation.

The case resolved amicably for $1.75 million less than six months after the accident. John has used the proceeds to expand his yard service, and he continues to work on the big trucks that almost took his life.