It took over a decade and a decision from the Florida Supreme Court before Jane Doe could get civil justice for the drunk driving death of her husband, a Navy veteran.

The drunk driver drifted into the break down Iane on I-95 hitting and killing John Doe while he changed a tire on his boat trailer as his wife looked on helplessly. The drunk driver kept right on going. A Good Samaritan took chase. Many miles and several U-turns later the drunk driver was tracked down. She was pinned into a 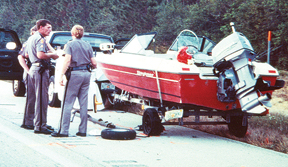 parking lot and a video shows her kicking the shins of the arresting officers.

The insurance on the car was not nearly enough to cover the judgments from trial of $3 million for compensatory damages, plus $3 million for punitive damages.

But the driver was by then a supposedly penniless convict and the jury did not think her multi-millionaire ex-husband's name on the title was enough to hold him liable.

The appellate court initially agreed by a vote of 2-1. Then, in a highly unusual move the Fifth District granted "en banc" rehearing and voted 5-3 to reverse itself. It certified the question to the Florida Supreme Court as one of great public importance. In a unanimous decision, the Florida Supreme Court reaffirmed Florida law, that a certificate title holder like the driver's husband is liable for the permissive use of the vehicle by another person and therefore, was required to pay the verdict.