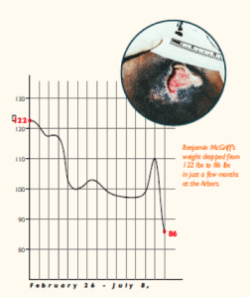 The surgical wound site was so foul that when it was unwrapped, the nurses had to put on masks. The bed sores were so deep that they almost reached the bone. The food care was so bad that John Doe's weight dropped from 122 lbs to 86 lbs in just a few months at the Arbors.

John Doe was an 80-year-old veteran with a loving, attentive family who lived at home until he had to have one of his legs amputated because of poor circulation. He was then sent to the Arbors of Jacksonville for rehabilitation and recuperation. His family visited daily and complained about the poor care and his deteriorating condition. Finally, the Veteran's Administration doctors stepped in and had him transferred to their facilities where he was nursed back to health.

The care at Arbors was so bad that even the doctors felt compelled to criticize it. The surgeon wrote directly to the nursing home complaining about the wound care. The VA doctor, who had treated over 10,000 patients in mostly third world countries, testified Mr. Doe's care was "one of a kind."

The nursing home records provided more ammunition for the plaintiff. Some of the records were missing. Some were falsified. Somehow the chart tripled in size after suit was filed.