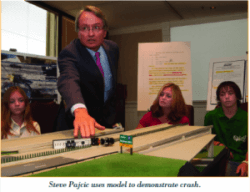 It was every driver's worst nightmare. On a sunny Sunday afternoon a southbound tractor trailer hit the concrete divider on I-95 and catapulted into the northbound lane.

John Doe never had a chance. The trailer landed on top of his pick-up which burst into flames.

John's wife and childhood sweetheart Jane and their two children were blindsided and bewildered. The Does were in the midst of building their dream home. John's boss wrote that he was "a ray of sunlight" on the job with "limitless potential". But family came first to John. He changed diapers, coached the kids in three sports, and was Jane's best friend and companion.

How could this happen? Jane was devastated but determined to get answers and find justice. Her Daytona attorney Gary Ballard referred her to Pajcic & Pajcic.

The answers Pajcic & Pajcic discovered proved just as shocking as the crash itself, and, though imperfect and inadequate as in all cases of fatal and catastrophic injuries, justice was served.

Of course, the driver Dennis Garrison blamed a phantom vehicle, and the investigating officers found him credible and unimpaired.

The truth was that Garrison was a stay-up-all-night, sleep-all-day crack cocaine addict who fell asleep at the wheel. He had previously been fired for failing a drug test after an accident.

The trucking company, Pacer Cartage, could easily have found out about Garrison's prior problems with drugs and driving. But, instead of actually checking Garrison's record, its terminal manager fabricated a background check and made up a road test. 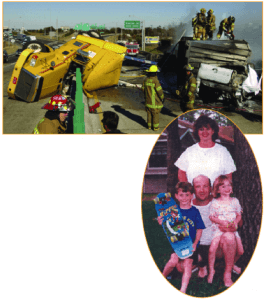 It was not easy to get these answers. Pacer and its trucking associates hired four of Jacksonville's best defense firms to assist an Atlanta firm which took the lead.

That formidable legal team, while always ethical and professional, ingeniously pursued every imaginable defense to suppress drug testing and personnel records and then to challenge their relevance and admissibility. Both sides expended considerable time and effort locating every lay witness with material information and retaining the best qualified expert witnesses.

Negotiations were complicated by insurance coverage questions and the intricate interplay of insurance layers and retentions. After two mediations and post-mediation negotiations, the defense, emboldened by an order denying punitive damages, drew the line at $8 million.

Jane had the courage to follow Pajcic & Pajcic's recommendation and insist that $10 million was the fair value.

The case finally resolved for $9,650,000 just before a hearing on plaintiff's renewed motion for punitive damages.

Jane says, "no amount of money could ever replace John, but I hope this settlement sends a message to trucking companies. My prayer is that the settlement will make our highways safer so that other families won't have to suffer this kind of tragedy".

Pajcic & Pajcic and its clients go through so much together. Although there is no comparison in intensity, we share in the initial feelings of grief and anger. And then there's the determined quest for justice. By the time the verdict or settlement comes, we have forged and fused a feeling of family between client and firm. While not expected and certainly not solicited, we are always touched by expressions of appreciation such as Jane's.