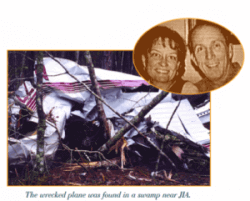 The last day of trial provided one of those Perry Mason moments.

Among the thousands of potential exhibits, a seemingly insignificant photograph taken at the crash scene by the Jacksonville Sheriff's Office provided critical proof that air traffic controllers had failed to advise the pilot about rapidly deteriorating weather conditions. The pilot and his three passengers had perished in the crash of a single-engine Piper Cherokee at Jacksonville International Airport on the evening of December 12, 2001.

Attorney Joe Public had flown his clients, Jane and John Doe, and his associate, Richard Roe, from St. Augustine to Fort Lauderdale that morning for a deposition. On the return flight that evening low-lying fog forced Public to execute missed approaches at the St. Augustine airport and then again at Jacksonville's Craig Airport. The crash occurred when Public pulled out of his subsequent attempted approach at JIA, which had also become enveloped in the fog.

Federal Judge Timothy J. Corrigan found Public himself was partly responsible for the crash because he decided to attempt an instrument approach at JIA while fatigued and on medication for a respiratory illness. The question was whether the air traffic controllers were even more at fault because they had failed to advise Public of the rapidly deteriorating ceiling and visibility at JIA.

Had the controllers told Public that the fog was now blanketing JIA? That was the critical question. The key controller's testimony had evolved through five versions until at trial he testified that he told Public everything. 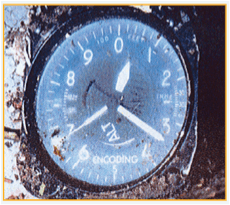 To the surprise of the FAA and its final expert witness, the JSO photograph proved otherwise.

The photograph showed a gauge from the plane's instrument panel almost hidden in the swamp, but the setting of the dial on the altimeter was unmistakable.

It clearly showed that, in setting the dial during his approach to JIA, Public was still operating under a tragically outdated weather advisory.

After Judge Corrigan entered an order assigning 65% of the responsibility to the FAA, the parties resolved all four death cases for a total of $9.48 million.

Since the passengers' claims against Public had been resolved before suit was filed, the plaintiffs' trial presentation was a cooperative effort of Public's attorneys: Spohrer, Wilner, Maxwell and Matthews; Roe's attorneys: Soud & Soud; and Pajcic & Pajcic, representing the Does' two adult daughters.

The tragic sorrow of the surviving family members was compounded by their discovery of an eerily similar case involving the father of golfer Davis Love, III. The families and their attorneys are hopeful that after this second case FAA controllers will finally fully accept responsibility to provide pilots with current weather conditions and that America's exemplary system of air traffic safety will be even better in the future.