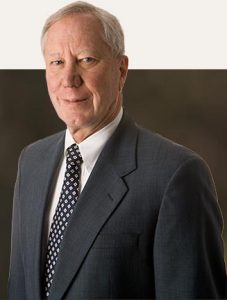 There are few people who can match Bill Burns' extensive knowledge of the law. He is regarded as one of the most experienced trial lawyers in our area, having worked on thousands of cases. He has practiced in the personal injury field since 1974 and with The Law Firm of Pajcic & Pajcic since 1996. Bill has worked on all three sides of civil litigation. He was an insurance defense attorney for 20 years, a Certified Mediator for 5 years and is now a well-respected plaintiff's attorney.

Bill graduated from Lehigh University as a Civil Engineer, and later graduated from law school at Florida State University with honors. He spent 3½ years on active duty as an officer in the United States Navy (Civil Engineer Corps). Bill has been a Board Certified Specialist in Civil Trial Law since 1992. The rigorous requirements for Board Certification limit the number of lawyers that are able to attain that distinction. In addition, he was invited to be a member of the American Board of Trial Advocates, and has received the highest rating possible as an attorney by Martindale-Hubbell (AV Rating).

Bill is a world traveler having visited over 65 countries on 6 continents. One day he will get to Antarctica! His interests include gourmet food and wine. He is also an avid photographer. Bill and his wife are animal lovers and have welcomed several dogs and cats into their home.

Bill has literally given his blood for others, having donated over 55 gallons of blood during his donation life. He also served on the Board of Directors for the blood bank (Florida Georgia Blood Alliance 1995-2007) and served as Chairman of the Board from 1999-2001. When Bill was a Certified Mediator, he served as a mentor to new mediators.