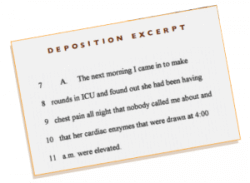 It was yet another case of failure to treat heart problems seriously enough when the patient is a woman.

The day after her discharge following a caesarian delivery Jane Doe had to be air flighted back to the hospital because of severe chest pains and rapid respiration and pulse.

Jane was seen in the ER by a pulmonologist whose admitting diagnosis included a suspected heart attack, but then said she could be seen by a cardiologist in the morning.

During the night Jane's pain became so excruciating that it required morphine. At 4:05 a.m. lab results showed that Jane was experiencing a massive heart attack; yet Jane was not seen by a doctor until the pulmonologist came in at 8:00 a.m. By then it was too late.

Jane's heart damage is so extensive that she will probably need a heart transplant. She had to quit work and requires assistance with her children and housework. Between mediation and trial, the two defendants settled for a total of $1,650,000. Jane still cannot resume normal activities, but at least she can now afford help around the house and the health care she needs.