$1 Million for Death from Anesthesia Malpractice 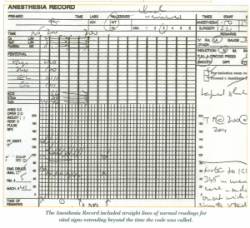 John Doe was a healthy, 32 year old computer specialist in the public defender's office with two darling daughters and a pregnant, devoted wife. He went in for routine, outpatient knee surgery and, incredibly, died during this simple procedure.

According to the anesthesiologist Dr. X, everything was fine until near the end of the procedure when he noticed sudden heart problems developing. Dr. X said that, despite heroic effects by him and the code team, nothing could be done probably because John had an extremely rare muscle disorder which caused a fatal reaction to one of the anesthesia medications.

John's wife Jane could not understand how her husband could die from anesthesia with all the equipment and advantages of modern medicine. She asked Pajcic & Pajcic to find out the truth.

In most malpractice cases the truth is hard to discover because of incomplete records and convenient memory lapses. In this case Pajcic & Pajcic concluded that the anesthesia record was so incomplete as to be an indictment itself. Indeed, the chart almost appeared to have been made out in advance, including straight lines of normal reading for vital signs extending beyond the time the code was called.

Hidden in the other medical records were signs that the problems may not have been so sudden as Dr. X claimed and, in fact, may not have started with the heart but with a failure of oxygen supply. An arterial blood gas reading had such a low level of oxygen that Dr. X had to claim it was venous instead of arterial.

Dr. X also had to explain away the resuscitation nurses' note that John was already cyanotic when the code team arrived. His explanation was that John's Phillippines heritage just made him appear more bluish than he really was.

Pajcic & Pajcic concluded that it was not a rare muscle disorder, but Dr. X's inattention to the oxygen supply, and perhaps even his absence from the room, that caused John's death. The difficulty with this explanation is that it requires the rejection of Dr. X's records and testimony as untruthful, an opinion few doctors are willing to offer about a fellow colleague.

Of course, as in almost all malpractice cases, the defense had little trouble finding other doctors willing to accept everything Dr. X said at face value. Fortunately, Pajcic & Pajcic was able to find other physicians courageous and honorable enough to tell it like it is.

Jane Doe' strong religious faith gave her the strength to hold out until just before trial to recover the full million dollars she needed so that she could have financial security and still devote her time wholeheartedly to her and John's children. Dr. X has retired from the practice of medicine.