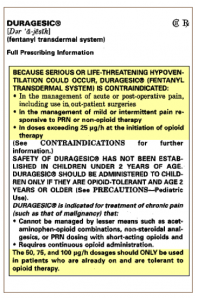 Jane Doe slipped in her bathtub and broke her arm. The ER doctor prescribed some pain pills and sent her home. When the arm was still hurting the next day, Jane went back to the ER and the same doctor changed her pills and added a pain patch.

The next morning when her sister and neighbor, Joan Roe, came over to drive Jane to the doctor, Joan found Jane unconscious and barely breathing. When Joan contacted Pajcic & Pajcic about Jane's case, she was in a nursing home, mentally confused and wheelchair bound.

How could all this happen from a broken arm? Pajcic & Pajcic's investigation and medical research showed the pain patch to be the culprit. It was a 100 ug/h Duragesic (fentanyl) patch. Fentanyl patches are not really appropriate for traumatic injuries, but are usually reserved for long term, intractable pain such as with cancer.

Worse still, 100 ug was way too much for a first time user, especially when combined with the Oxycotin pills the ER doctor had also prescribed. In fact, discovery showed that the doctor had originally prescribed a 25 ug patch, but changed it to 100 ugs when that was all the hospital pharmacy had.

The case settled for a small discount off the policy limits after one mediation and shortly before the deadline on a final policy limit demand.

Fortunately, Jane has continued to gradually improve. Although she has not been able to return to work or to driving, Jane is out of the wheelchair and will soon be living independently in a nice, new condominium with a good monthly income for life.