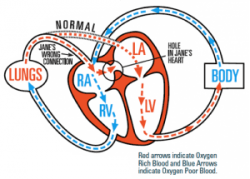 Jane Doe was an energetic, ambitious 17-year-old. Before seeking the medical treatment that caused her death, Jane had tried out for her middle school volleyball team, taken professional voice lessons, roller-skated, done hip-hop dancing, and volunteer work for a local rugby club. Despite all of these extra-curricular activities she managed to finish high school early and go straight into the work force. She did suffer from shortness of breath upon exertion, which her parents attributed to asthma, which had been her diagnosis since elementary school.

Because of her continued shortness of breath Jane sought more medical treatment. The doctors correctly determined that Jane had a congenital heart defect, a hole between her left and right atriums.

Tragically and inexplicably the doctors overlooked a second more critical congenital heart defect, by which her oxygenated blood returned to her right atrium instead of her left.

The hole in the heart actually was the body's way of correcting the circulation defect. When the surgeons closed the hole without first redirecting the oxygenated blood, Jane died instantly.

Because Jane was so young with no dependents, the medical malpractice caps severely limited the recovery for this clear malpractice. The defendants sought to limit recovery even more through the additional limitations that come into play when medical providers offer to arbitrate a case.

After careful analysis of the law as it applied during the relevant time, Pajcic & Pajcic concluded that they could maximize the recovery by Jane's parents by taking the unusual action of accepting arbitration of the case against the hospital (where liability was problematic) and refusing arbitration against the doctors (even though that would require proof of negligence).

In the arbitration proceedings Pajcic & Pajcic argued that language in the arbitration statute regarding economic damages actually enhanced the potential recovery in a case like Jane's. The case against the hospital resolved at mediation before arbitration.

In the circuit court case, one group of doctors offered their insurance limits when timely demanded in accordance with the bad faith provisions of the medical malpractice statutes. A second group of doctors settled at mediation.

While Jane's parents will never get over the loss of their precious daughter and will never understand why the Florida legislature has enacted so many limitations on recovery in a case like hers, they appreciate that the hospital and doctors could not so easily wash their hands of Jane's death.