Delivery Truck Pays $1 Million for Sticking Out Into Highway 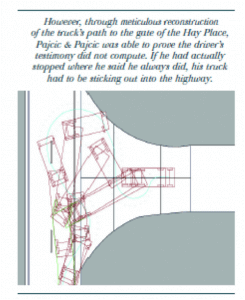 Joe and Jane Doe met when he was a fire marshall teaching Jane at firefighter school. After their marriage Joe encouraged and supported Jane in her pursuit of the elusive veterinarian degree. When Jane became a big animal vet, Joe retired to run the office, cut the six acres and feed the eight horses.

Before sunrise on September 30, 2005 Joe was headed North along US17 in Volusia County when the front of his car struck the rear of a truck making a delivery to the Hay Place. Joe suffered brain and spinal cord injuries from which he never recovered.

The truck driver claimed he was still turning when Joe hit him, and because of his brain injury Joe could never dispute his testimony.

However, through meticulous reconstruction of the truck's path to the gate of the Hay Place, Pajcic & Pajcic was able to prove the driver's testimony did not compute. If he had actually stopped where he said he always did, his truck had to be sticking out into the highway.

Despite the conflict on liability and comparative negligence and Joe's shortened life expectancy because of his significant pre-existing health problems, the case settled for $1 million.