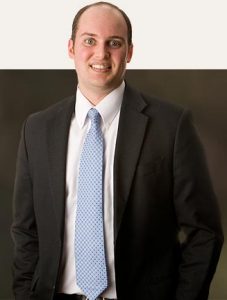 Ben Richard is the go-to person on all legal issues and he's involved in just about every single case in the firm. Ben is our in-house appellate attorney who joined The Law Firm of Pajcic & Pajcic in 2005. He's litigated numerous appeals in both state and federal court. In addition to litigating appeals, Ben provides trial support and appellate counseling to our trial attorneys during every phase of litigation and actively participates in jury selection, preparation of dispositive motions, motions in limine, and motions for summary judgment. His keen eye and depth of legal knowledge benefit all of our clients.

Ben and his wife Sarah enjoy traveling to new places, relaxing with family, and spending quality time with their two young children.

Ben is involved in most of the firm's pro bono cases and has handled numerous civil and criminal cases for individuals in need. Ben also mentors all of Pajcic & Pajcic's student law clerks.

Ben was admitted to the Florida Bar in 2005 and is admitted to all three Federal District Courts in Florida (the Northern, Middle and Southern Districts of Florida) as well as the U.S. Court of Appeals, Eleventh Circuit.