NIED Is Key to Million Dollar Recoveries for Wrongful Deaths 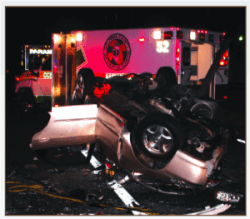 The deaths could hardly be more tragic. After a family visit, John Doe, Sr. asked if he could take his three-year-old grandson Jr. to the store with him.

On the way a drunk, speeding teenager hit John's car propelling it across the median into a head on collision with a pickup.

Family members rushed to the scene, but had to stand by in shock, unable to help or comfort the victims. Jr. died at the scene and John Sr. on the way to the hospital.

Though nothing could relieve the family's suffering, Pajcic & Pajcic was able to help them deal with the insurance and legal technicalities that only compounded their pain.

The way around both of these artificial limits is through claims for negligent infliction of emotional distress (NIED). Florida law allows these claims whenever a family member sees the victim at the scene and suffers physical symptoms as a result of the emotional distress.

The insurance companies involved put up varying defenses to the multiple claims, but ultimately paid their full limits per accident. Though the total recoveries exceeded a million dollars, they did little to relieve the family's grief over the senseless deaths of young Jr. and the family patriarch John Sr.