$1 Million Because Accident Affects Golf Swing of All Star Pitcher 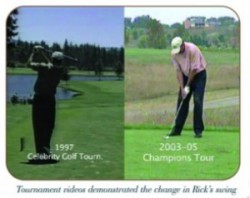 As Michael Jordan's attempt to play minor league baseball has shown, even the best athletes have trouble crossing over to a new sport after an all star career. John Doe is one of those rare successes. After 150 wins, two all star appearances with the Dodgers and a World Series ring with the Pirates, John took up golf and became the leading money winner on the Celebrity Golf Tour.

At age 49, John was preparing for a lucrative career on the PGA Senior (Champions) Tour when he got caught in a squeeze play between a pickup in front, which stopped suddenly, and a cement truck behind, which did not.

John felt immediate neck pain and sought chiropractic care, but did not see a medical doctor or consult Pajcic & Pajcic until two years later, when he noticed the neck pain was changing his golf swing and keeping him off the leader board.

The defendants disputed liability, causation and damages. The pickup claimed John had been tailgating him, and the cement truck said both vehicles had just sped around him and stopped on the two lane road. Even though John ultimately had a cervical fusion five years after the accident, the doctor who examined John for the cement company said that John had no injuries related to the accident.

Fellow professional golfers were ready to testify about the difference in John's game since the accident and how well they had expected him to do on the tour before his swing changed. Moreover, the operating neurosurgeon and a prominent Philadelphia sports surgeon testified that the surgery was causally related to the accident.

Despite the problems with liability and medical causation, facing a big potential claim for lost income, the two defendants finally offered $1 million a few weeks before trial.

The surgery has helped John's swing. Look for him on the Champions Tour.