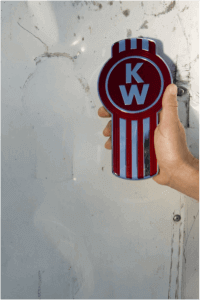 Two friends and co-workers, who were given the ticket for an accident on I-95 with a big truck, have recovered almost a million dollars from the trucker.

The trooper never got the friends' version of the crash because they were rushed to Flagler Hospital by rescue.

Both John Doe and Richard Roe ended up having shoulder surgery, but made good recoveries and returned to work. Because they knew the crash was not their fault, Roe and Doe looked for a lawyer to represent them against the trucker. After two law firms turned them down because they were charged with the accident, they finally found Pajcic & Pajcic.

Pajcic & Pajcic found an indention on the friend's trailer which matched the Kenworth logo and proved that the big truck hit them from the rear.

Pajcic & Pajcic's investigation not only proved that the truck actually hit the friends' trailer in the rear, but they also found compelling evidence of egregious misconduct and cover-up by both the trucker and his employer.

The truck driver Luis Fontanez had an awful record:

L & S and Fontanez continued their bad conduct in the lawsuit filed by Doe and Roe. The trial judge found that they intentionally destroyed critical evidence and ruled that L & S could be responsible for punitive damages.

Faced with all the evidence against it, the trucking company finally admitted liability and paid $900,000 to Doe and Roe to settle their cases. Doe and Roe still wish the crash had never happened, but at least feel that justice has been served.