Overturned semi-truck: 7 reasons why it happens 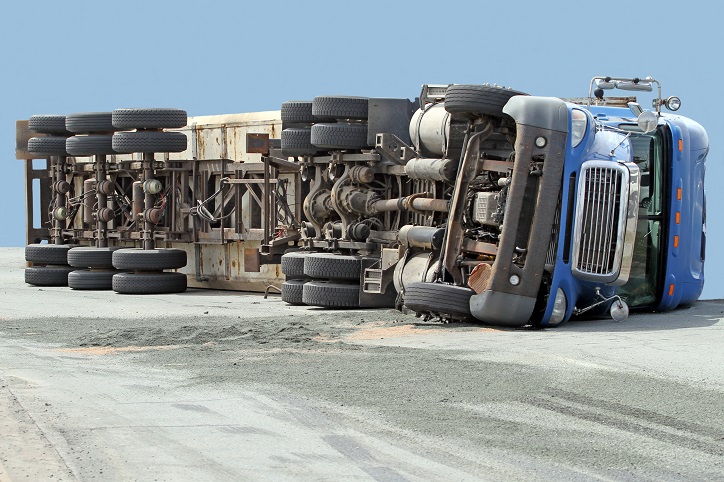 A rollover crash involving a semi can have deadly consequences. A large commercial truck has a massive size advantage over most other vehicles on the road, weighing as much as 20-30 times more than the average passenger vehicle. Big rigs also have high centers of gravity, making them susceptible to scary rollover accidents where the semi’s wheels lose contact with the surface of the road and the truck overturns on its side. Other truck rollover accidents result in the semi flipping completely upside down.

According to research by the Insurance Institute for Highway Safety, the majority of fatalities in accidents involving large commercial vehicles are passengers in other cars. The IIHS data also points out that “45 percent of deaths among occupants of large trucks occurred in crashes in which their vehicles rolled over.” In short, everyone on the road is at risk when a semi-truck tips over.

What causes a semi-truck to roll over?

Rollover crashes involving a tractor-trailer, 18-wheeler, or another type of big commercial vehicle can generally be broken up into two categories: “tripped” and “untripped.” When a semi-truck is tripped, its wheels leave the roadway after striking an object or coming in contact with soft soil. For instance, a big rig may overturn when its wheels collide with a curb or guardrail, with the tripping force on the wheels causing the truck to roll over.

An untripped rollover crash occurs when the centrifugal force of a top-heavy semi-truck induces the big rig to skid out of control and flip over. For example, a large commercial vehicle with an unbalanced cargo load takes a curve too fast and overturns.

While other drivers are sometimes to blame, most rollover crashes involving a large commercial vehicle can be traced back to trucker or trucking company negligence. Some of the most common ways a big rig can overturn include:

What all these issues have in common is the role of recklessness on the part of the trucking company. Trucking companies put extreme pressure on their drivers to make unrealistic delivery schedules, which results in speeding on the road and rushed loading and maintenance off the road. Truckers drive distracted, in part, because they often drive straight through breaks that would otherwise be opportunities to complete non-driving tasks. The trucking companies have a legal responsibility to put safety first, but too often, it takes a back seat to profit.

How a lawyer can help

Cases involving truck accidents are rarely straightforward and often complex – and the same can be said for truck rollover crashes. That’s because in any given accident with a commercial vehicle, there may be multiple parties that can be held legally responsible for a victim’s damages. Most trucking companies also have high-limit insurance policies, meaning the stakes are high and they have a vested interest in paying you as little as possible.

At Pajcic & Pajcic, our highly skilled legal team has extensive experience successfully handling cases involving truck accidents. In one case, we obtained nearly $3 million for a client who was severely injured in a bad highway crash involving a dump truck and a van.

If you’ve been seriously injured or a loved one died due to a rollover truck crash, contact us in Jacksonville for a free and confidential case evaluation. Our attorneys can review the details of your case and explain your legal options so you can decide what to do next.