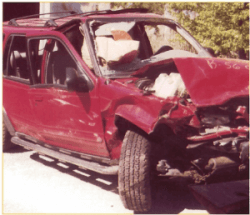 Sister and brother, Jane and John Doe, had been Christmas shopping in Jacksonville and were almost safely back home to rural Baker County when a tractor-trailer swerved into their right hand lane on I-10 and sent their SUV hurtling into a fence and concrete culvert.

Fortunately, they were both wearing their seatbelts and survived with permanent injuries that have not prevented their eventual return to work. Nevertheless, the defendant paid $1.4 million to resolve their claims because of Jane and John's impressive character and because Pajcic & Pajcic was able to prove that the truck driver was once again driving illegal hours and drifting out of his lane to cause an accident

The insurance company for the trucker offered an early resolution of the case, but insisted it be substantially below $1 million. Pajcic & Pajcic filed suit and discovered egregious facts about the truck driver which supported a motion for punitive damages and justified the significantly heightened recovery.

As expected, the truck driver's logs showed him in compliance with federal regulations limiting driver's hours. Pajcic & Pajcic discovered, however, that the truck contained an onboard automatic recording device which contradicts the logs and proves excessive hours. Further discovery showed the driver guilty not only of excessive hours, but also prior accidents where this truck ran off the road because of alleged phantom vehicles.