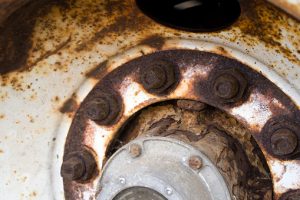 They are often regarded as "freak accidents." Truck crashes caused by wheel separation are typically rare. When they occur, they often create a path of destruction. Unfortunately, many truck wheel separations go unreported. When an unsuspecting motorist is suddenly struck by a rogue wheel, the source may be unknown at the time of the crash.

Truck wheel separations usually happen at high speeds and on major roads or interstates. Once a wheel is propelled onto the roadway, it can strike other vehicles and obstruct traffic. A separated wheel can be projected onto other roadways or roll off an overpass. Additionally, pedestrians, bicyclists, and even building occupants can be struck. Due to its size and weight, a truck wheel can inflict a significant amount of damage.

Aside from the rogue wheel, the large commercial vehicle itself can careen out of control and cause a collision, jack-knife accident, or rollover.

The cause of wheel separations comes down to maintenance - and the trucking company and driver are both responsible for taking care of:

When negligence occurs, our legal team can help

Officials first began scrutinizing wheel separation accidents in 1992 after several incidents in the fall of 1991 that resulted in seven fatalities. Since then, the problem has been mitigated by strict maintenance regulations and commonplace procedures, but these accidents continue to happen.

One truck accident caused by a wheel separation in Illinois made national headlines in 2018. The passenger vehicle driver was on her way home from work on Interstate 80 when a 100-pound wheel came loose from a large truck and smashed into her windshield. She was rushed to a nearby hospital where she was pronounced dead.

If you or a loved one was involved in an accident with a large commercial truck, it's crucial that you consult with an experienced Jacksonville truck accident attorney.

Investigating these types of crashes may be a challenge, especially if the truck driver was unaware that a wheel detached from his or her vehicle and failed to stop as a result. The legal team at Pajcic & Pajcic will launch a thorough investigation into the cause of your crash. They may include obtaining a detailed police report, speaking to witnesses, and issuing a subpoena for camera footage (if available).

We have a proven track record of helping injured motorists seek justice - including a $9.65 million settlement in a fatal accident involving a truck driver who fell asleep at the wheel.