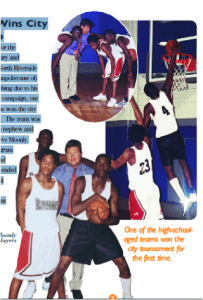 It was a banner season for the basketball program which Gary and Steve Pajcic sponsor for the North Riverside neighborhood. Despite (or perhaps because of) Steve's unavailability for coaching due to his involvement in Bill Bradley's campaign, one of the high-school-aged teams won the city tournament for the first time. The team was coached by Gary and Steve's nephew and fellow plaintiff's attorney, Steve Moonly. This year the part of the program which awards new clothes and shoes for good grades was extended to Robert E. Lee High School teams which had their best season and highest grade point average in a long time.