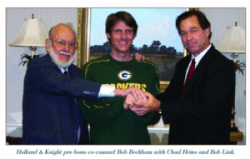 The Law Firm of Pajcic & Pajcic is pleased that its pro bono efforts have assisted in the exoneration of an innocent person.

Chad Heins had served 12 years of a life sentence for rape and murder when his letters to the Innocence Project led to a petition for DNA testing. The testing showed DNA from skin under the victim's fingernails and from pubic hair on her body did not match Chad's DNA. Remarkably, however, the skin and hair DNA did match each other, which suggested a different, unknown assailant. The judge ordered a new trial for Chad, and the state announced its intention to retry him.

At this point the Innocence Project asked The Law Firm of Pajcic & Pajcic attorney Bob Link to act as lead counsel for trial. After approximately a year of legal maneuvering, it was determined that a stain on the victim's bed sheet had never been tested. DNA testing in November 2007 showed that the stain on the sheet was semen. The donor of the semen had the same DNA as the donor of the pubic hair and the skin under Tina's fingernails. Additionally, a former cellmate of two informants who had testified against Chad in the original trial admitted that he and they had initially fabricated the story of Chad's confession in order to gain favorable treatment in their own cases.

Finally, on December 4, 2007, the state attorney's office agreed that the charges against Chad Heins should be dismissed. Chad is now a free man, and was able to spend Christmas with his parents and children in Wisconsin.