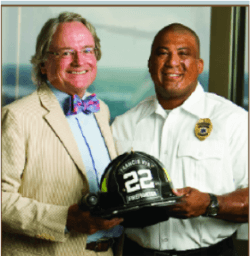 Tyrone Wilkerson is now fighting the fires that almost consumed him as a child. 17 years ago Tyrone decided to build a volcano as his fifth grade science project. Tragically, when Tyrone tried the experiment at home, an explosion engulfed him and he suffered such severe burns that he was life flighted to four different hospitals, ending up at Shriner in Cincinnati, where he had over 20 surgeries. When Tyrone's mother Kathaleen called The Law Firm of Pajcic & Pajcic, we could find no fruitful avenue of legal recovery, but Gary and Steve promised to give Tyrone all the help he needed for his education. Tyrone completed paramedic training and now works as a firefighter for Putnam County. He plans to go on to get a bachelor's degree in fire science.