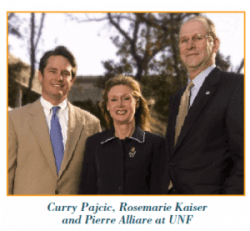 For the family of Jason Panides, it was always about justice and respect for his memory. A highly respected and honored member of the United States Border Patrol, Jason was capturing illegal immigrants when the truck hit him on a highway outside Laredo, Texas. The trucker claimed he could not avoid Jason, but meticulous investigation and a reconstruction by The Law Firm of Pajcic & Pajcic showed that Jason actually ran into the road trying to avoid the truck which had drifted off of the road. Defendant also faced the threat of exemplary damages under Texas law after The Law Firm of Pajcic & Pajcic proved the trucker was way over hours with fictitious logs and a prior traffic homicide. The case settled for a confidential amount just as the trial was beginning. Jason's mother Rosemarie Panides - Kaiser donated $50,000 to the University of North Florida in his memory, which was matched by an equal donation by The Law Firm of Pajcic & Pajcic.