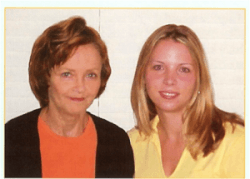 My name is Jeannie Coleman. My daughter, Christin Coleman, graduated from Paxon and attended UNF as a Pajcic scholar. My late husband and I both graduated from Paxon in 1956 and 1964, respectively. We all know of the wonderful opportunity that the Pajcic Scholars Program presented to all of the students of Paxon and Christin worked hard so that she would be able to take advantage of it.

The program was like a light at the end of the tunnel for Christin. She had to make it through some very tough times in her high school years. Her father died when Christin was a sophomore, and doctors discovered that I had several aneurysms the next year and had to have neuro-surgery. Throughout the entire ordeal, Christin took care of me, worked part-time, and was active in school activities like the yearbook and the national honor society. She also managed to keep her grades up and graduate as Paxon's valedictorian.

While attending UNF, Christin worked part-time and continued helping me recover from several surgeries. She earned a Bachelor of Science in Biology with a 3.48 G.P.A.

I am so proud of her and I wanted to tell you her story so that you would know what a difference your program made in our lives.