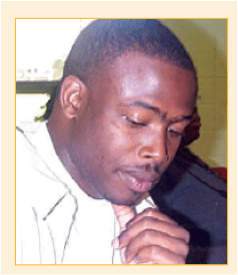 While he was still in elementary school, Don Jackson could almost dunk the ball and had a real jump shot from the top of the key. He did not grow anymore and ended up as a point guard in high school. Not talented enough for a basketball scholarship, Don still wanted to go to play in college and get a degree. Don had played several years on the youth basketball teams which Gary and Steve Pajcic had sponsored in a Jacksonville urban neighborhood. Gary and Steve have told all the players that they would pay for college for anyone who gets accepted.

Unfortunately, many more players have ended up in prison than in college. Don is one of the success stories. He graduated May 2005 from Shaw University with a bachelor's degree in criminal justice. We are all very proud of Don and wish him the best.