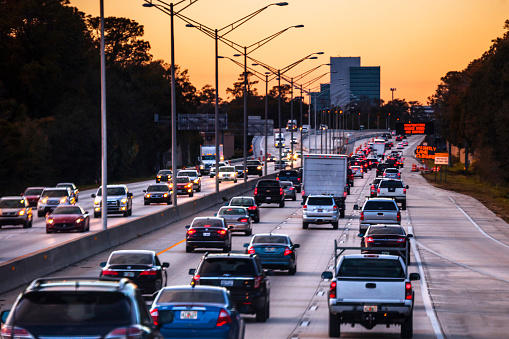 A spike in fatal car accidents across the U.S. is being described as “preventable” by top traffic safety officials who recently unveiled a plan to reverse the trend.

Federal data says that 2021 was the deadliest year on U.S. highways in nearly two decades. Just under 43,000 people were killed on the roads last year. That is more than a 10% jump since 2020.

Almost every state reported increases in traffic deaths. Florida had the third-highest increase behind Texas and California.

The National Highway Traffic Safety Administration (NHTSA) reports that all types of crashes increased in 2021, including fatalities involving big trucks, motorcycles, and bicyclists. Deaths involving speeding and alcohol were also on the rise.

Bad driving behavior that began during the COVID-19 pandemic – like speeding and driving without seat belts – continued even as more people took to the road in 2021. This partially explains the surge in fatalities. Reckless driving is almost always a choice. Therefore, many negligent crashes are preventable, the NHTSA says. The administration recently unveiled a plan to decrease deadly and injury-causing accidents.

Transportation Secretary Pete Buttigieg is calling the hike in deadly car accidents a “crisis” on the roads. Deputy NHTSA Administrator Steven Cliff says that the roadway crisis is “urgent and preventable.”

“We will redouble our safety efforts, and we need everyone - state and local governments, safety advocates, automakers, and drivers - to join us,” Cliff said in a statement. “All of our lives depend on it.”

In response to the crisis, a plan aimed at reversing the dangerous trend has been developed.

Pajcic & Pajcic has worked on hundreds of cases where such automatic braking systems would have prevented catastrophic injuries and saved lives. This includes a recent case where a Nassau County jury returned a $1 billion verdict in the death of a teenager killed by two distracted truckers.

If you were injured or a loved one died in a car accident due to negligence, you may be entitled to compensation for your losses (e.g., medical bills, lost wages, replacement services, pain and suffering, etc.). The problem is the insurance company looks at your claim as nothing more than a threat to their bottom line, and they do not have your best interests at heart. Insurance adjusters are trained professionals who devalue, dispute and deny claims every day, and if you're not careful, you could end up missing out on the compensation you're entitled to.

That's why you need an experienced car accident attorney to counter the insurance company's tactics and aggressively advocate for your best interests. At Pajcic & Pajcic, we've been fighting for crash victims since 1974 and understand what it takes to build a winning case that gets results. Our highly skilled legal team has the knowledge, experience, and resources to handle every aspect of your claim, that way you can focus on healing and getting your life back together.

Discover what our law firm can do for you and contact us today for a free consultation with an experienced Jacksonville car accident lawyer.