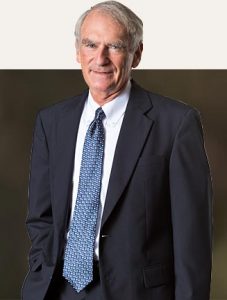 Bill has been practicing law in Jacksonville for over 40 years. His expertise is in appellate work and legal writing. He first worked at The Law Firm of Pajcic and Pajcic from 1976-1987, and we were delighted to have him rejoin the firm in 2013. Bill has appeared before the United States Supreme Court. His past work as a Certified Mediator gives him a unique perspective, and he has a wealth of knowledge on all legal issues.

The present focus of Bill's practice is legal writing and oral argument at both the trial and appellate levels. He is a past member of the Florida Board of Bar Examiners, the Florida Supreme Court Committee on Standard Jury Instructions, a Florida Bar Grievance Committee, and the Jacksonville Area Legal Aid Board of Directors. Bill graduated from Duke University and Harvard Law School.

Bill enjoys playing bridge and spending time with his wife, two children and four grandchildren. He is also a fabulous cook. His specialty is baking bread from scratch.