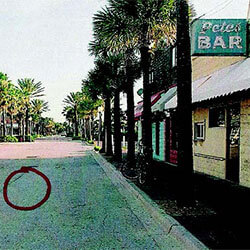 It seemed like just another fight outside the iconic watering hole "Pete's Bar" at closing time, but this fight forever changed the life of an innocent bystander.

John Doe worked nearby, was a regular at the bar, and was friends with everybody, including those on both sides of the fight. John had just left Pete's and encountered patrons fighting. He has no memory of anything that happened that night because he was sucker punched and his skull cracked on the cement.

John had to have surgery on his brain and ended up with over $1 million in medical bills. He can now walk, but he still often uses a cane and has trouble with stairs. He can understand what people say to him, but he is very frustrated that his brain injury has left him unable to speak other than a few words at a time. He can never be left unwatched.

Police records showed a long history of calls because of trouble at Pete's. All the other bars in the neighborhood hired a police car to be out front at closing time, but not Pete's. Pete's may have had no security, but at least it had insurance. Pajcic & Pajcic gave the insurance company a comprehensive settlement package and an offer to settle the case for the $1 million policy limits.

The company at first denied its policy covered the incident, but they abandoned that tactic and said Pete's was not responsible because the fight happened outside the door and because John himself was drunk.

The insurance company finally offered its limits before trial, but John and Pajcic & Pajcic decided it was too late. At trial, Pete's employees denied any involvement, but Pajcic & Pajcic played the police recordings to prove what really happened. On the recording, the Pete's doorman told the detective that he sent another patron, who he knew was drunk and a gifted fighter, to break up an argument. As soon as that patron stepped out the door, the fight erupted.

The jury found Pete's liable and returned a verdict for $18,740,000. It also found John 40% at fault and the judge reduced the award accordingly. Since Pajcic & Pajcic had filed a proposal for settlement to Pete's, it was entitled to attorney's fees on top of the judgment.

The defense challenged the verdict, but on the eve of oral argument before the appellate court agreed to settle for a slight discount off the judgment. The insurance company ended up paying the entire settlement even thought it was way more than the policy limits.

The best thing that has happened to John since the injury has been his marriage to his sweetheart from before. She and John moved back to her house in Tennessee where her parents have been a tremendous help with his care. Life will be much easier for all of them now that he can afford to pay for the care that allows the couple to live independently in their own home.

After the settlement, everyone came to Jacksonville to celebrate with the trial team. John went home with a smile on his face and a little something extra-the hat he had admired on Steve's head.