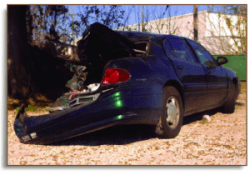 Jane Doe's uncle from Birdville played basketball at Paxon High School with John and Steve Pajcic. Another Doe, who may be a cousin of Jane's husband John, played baseball with them at Woodstock Park. When Jane's car was hit from behind by a tractor trailer on I-95, John Doe called Pajcic & Pajcic immediately.

The crash caused serious injuries to Jane's lower back. When injections would not relieve her pain, Jane's doctor implanted a pain pump in her back. Jane ended up losing her job at Home Depot where she had enjoyed working with her 70 year old mother.

The accident had started when a car with bald tires spun out of control in front of Jane. The first car did not hit any other vehicle, so its insurance company refused to pay its limits when demanded by Pajcic & Pajcic. The trucker claimed that Jane had panicked and veered into his lane. But Pajcic & Pajcic caught him in untruths at his deposition with photographs that showed damage on the vehicles incompatible with his allegations.

At mediation the trucking company paid $1 million. The insurance company for the first driver subsequently paid seven and a half times its policy limits.

In appreciation of long time family friendships and the help of Pajcic & Pajcic, Jane's husband John Doe says he will try to reassemble his gospel quartet to sing at Pajcic & Pajcic's next Christmas party.