Client then dedicates his life to helping others 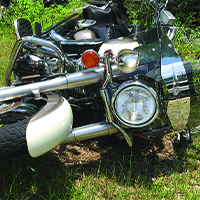 Vaughn, a graduate of the Virginia Military Institute and a former Air Force Officer, was enjoying a motorcycle ride on a clear afternoon in Starke, when his world was suddenly shattered. A pickup truck driver distracted by his cell phone ran a stop sign and slammed into the left side of Vaughn’s motorcycle, nearly severing Vaughn’s left leg. He was rushed to UF Health Shands in Gainesville where doctors tried to save the leg, but the prognosis was bad, with necrosis, years of surgeries and likely loss of use. Vaughn could see his foot turning black and saw the extensive damages on the x-rays. Vaughn and his wife made the gut-wrenching decision to have it amputated. 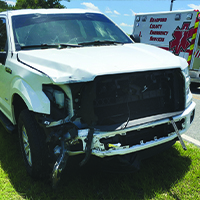 A friend recommended Pajcic & Pajcic, and Vaughn says he will be forever grateful.  Pajcic investigators found witnesses who had information the police did not know and that helped prove the truck driver was driving while distracted by cell phone use.  When the at-fault driver’s insurance company hesitated about paying its meager policy limits, Pajcic & Pajcic filed suit and ultimately got the insurance company to pay more than 40 times the limit. 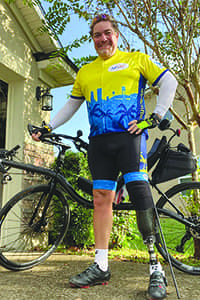 Vaughn now dedicates his life to counseling amputees in a support group. “You feel like you are the only one. I can tell them ‘It is going to be okay and help them heal.’” He also maintains a blog for amputees and is involved with the Challenged Athletes Foundation which provides adaptive equipment for the disabled. The Pajcic Firm donated $10,000 to the charity on Vaughn’s behalf. 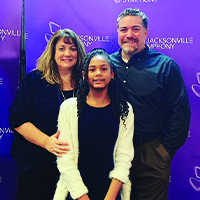 Vaughn’s youngest daughter has juvenile diabetes, so he is a staunch supporter of efforts to find a cure and he currently works in organ transplant recovery. He is even a licensed funeral director and is now pondering writing a book.

His motorcycle days are over, but the loss of his leg has not stopped Vaughn from riding the pedaling kind of bike.