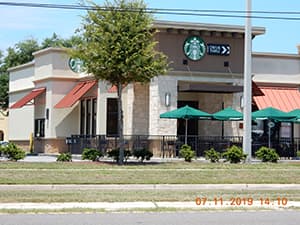 Sherry was an active 72-year-old who enjoyed searching for antiques in thrift stores and going out to eat with friends. But a simple trip to get coffee turned her life upside down.

Sherry was critically injured while exiting a Starbucks in Nassau 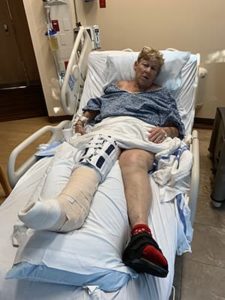 County. She was hit by a car that had been leaving the coffee shop’s drive-thru. She suffered crushing injuries to her knee, ankle and foot.

The Starbucks Corporation blamed Sherry and the other customer and refused to accept any responsibility for its dangerous design, so Pajcic & Pajcic took the case to trial. In court, jurors were told how Starbucks’ design flaws forced walk-in customers off the curb and into the path of the drive-thru traffic. The jury deliberated for almost six hours before

reaching its verdict and awarding Sherry over $8.9 million. Jurors concluded that Starbucks was 100% responsible for the negligent setup and design of the drive-thru without regard for the safety of its customers. The jury found that Sherry and the driver who hit her were both victims of The Starbucks Corporation’s negligence, assigning them 0% fault.

Sherry was grateful to the jury for holding Starbucks responsible. “I hope this sends a message to the Starbucks Corporation. This should never happen to anyone else.”